David Landless joined the Board as Non-Executive Director in March 2013. Effective May 16, 2019, he was appointed Chair of the Board of Directors. Mr. Landless currently acts as a member of the Nominating and Governance Committee. 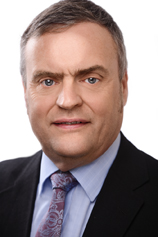 Mr. Landless started his career with Bowater Plc, a pulp, paper, and related products manufacturer, and Carrington Viyella Plc, a manufacturer of woven textiles. He joined the fiber and chemical manufacturer, Courtaulds Plc, in 1984. Mr. Landless was appointed Finance Director in several U.K. and U.S. divisions of Courtaulds Plc from 1989 to 1997 and the Finance Director of Courtaulds Coatings (Holdings) Limited from 1997 to 1999. In 1999, Mr. Landless was appointed Group Finance Director of Bodycote plc, the leading provider of heat treatment and specialist thermal processing services worldwide, and he held that position until he retired on January 1, 2017. He is a Non-Executive Director of Innospec, Inc., as well as Renold plc and European Metal Recycling Limited. He chairs the Audit Committees at Innospec and Renold.

Mr. Landless is a Chartered Management Accountant. He graduated from the University of Manchester Institute of Science and Technology.