Mark Chivers was appointed Vice President and General Manager of Luxfer Superform in 2018. 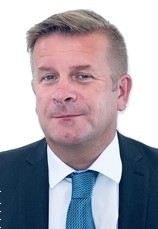 Mr. Chivers joined Luxfer in 2009 as the Superform Operations Director of the UK, moved to be the Superform Operations Director of the US in 2014, then the General Manager of Superform of the US in 2016. Prior to joining Luxfer, he worked as Production and Operations Management roles within the aluminum castings and engineering industry predominantly supporting automotive supply. Mr. Chivers received a B.A. in Business Studies at Wolverhampton University.