Richard Hipple joined Luxfer’s Board as a Non-Executive Director in November 2018, at which time he was also appointed Chair of the Remuneration Committee and a member of the Audit Committee. 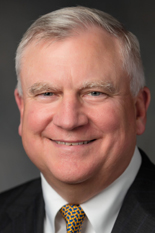 Mr. Hipple served as the Chairman and Chief Executive Officer of Materion Corporation, a producer of high-performance advanced engineered materials, from 2006 until his retirement in 2017, as well as President and Chief Operating Officer from 2005 to 2006. Prior to that, Mr. Hipple worked in the steel industry for twenty-six years in numerous capacities, including project engineering, strategic planning, supply chain management, operations, sales and marketing, and executive management. Mr. Hipple has served as a Director of KeyCorp (NYSE: KEY), a bank-based financial services company, since 2012 and is the current Chair of the Audit Committee and a member of the Nominating and Corporate Governance Committee. Since 2017, he has also served as a Director of the Barnes Group (NYSE: B), a global industrial manufacturing company, and is a member of the Compensation and Management Development and Corporate Governance Committees. From 2007 through 2018, Mr. Hipple served on the Board of Ferro Corporation, a leading supplier of technology-based functional coatings and color solutions.

Mr. Hipple is the Chairman of the Trustees of the Cleveland Institute of Music and has served as a Director of the Greater Cleveland Partnership, as well as the Manufacturers Alliance for Productivity and Innovation. Mr. Hipple received his Bachelor of Engineering degree from Drexel University.